The amount of high quality submissions keeps amazing us!
We’ll do a final selection soon, but not before this thursday. To give everyone a bit of insight in what we look for, and to give some of the contributions an honorable mention, here’s a collage of designs that we liked. It might be that we missed one or two good ones, don’t complain if yours is not there! Also the ones added the past 24 hours haven’t been reviewed yet.

Don’t forget: the logo submissions and reviews are on our forums.

While memory is a dry topic, many of you would have experienced Blender grind to a halt (or worse), with big files the workstation can’t handle.

Yesterday Beorn was having trouble loading a scene which was taking a lot of memory, After concluding it wasn’t a memory leak in blender I looked into why Blender would show 75mb in use while the system monitor shows over 700mb.
It turns out is because the operating system cant always efficiently deal with applications memory usage and ends up using a lot more ram.

So I tested jemalloc, an opensource drop-in replacement for the operating systems memory allocation calls, used by firefox, facebook and freeBSD according to their site.

I was surprised to find memory usage went down by up to 1gig in some cases, without noticeable slowdown, using less memory in almost every case.
It can also decrease render times in cases where the system starts to use virtual memory.

END_OF_DOCUMENT_TOKEN_TO_BE_REPLACED

Yesterday we went to the 4k viewing room from Cinegrid Amsterdam again (www.waag.org). They were still fighting desktop issues, silly drivers stuff… the picture below was meant to be the first in a series showing us watch 4k, but then the camera battery went down! Still, it’s an insane  screen with epic proportions and resolution. So cool to see our work on it! 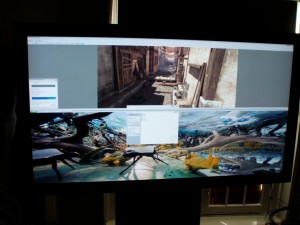 END_OF_DOCUMENT_TOKEN_TO_BE_REPLACED

As mentioned in my last blog post, there were four big changes planned, shading system refactor, indirect lighting, per tile subdivision and image tiled/mipmap caching. As usual, in practice those plans can change quickly in production. So here’s an update on the plans and some results.

For indirect lighting, the intention was to use a point based method. I found the performance of these quite disappointing. The micro-rendering method works well only with low resolution grids, but this is noisy, and when increasing the resolution suddenly performance is not as good any more. That leads to the Pixar method which is somewhat more complicated. This can scale better, but the render times in their paper aren’t all that impressive, in fact some raytracers can render similar images faster. 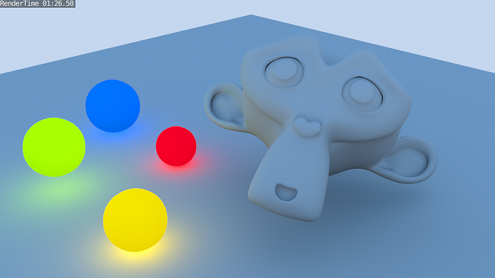 END_OF_DOCUMENT_TOKEN_TO_BE_REPLACED

Its been a while since we had a development post and while we’re always busy with blender much of it is work in progress.

Most of my time is spent on physics and bug fixes at the moment but seeing as it was my birthday on Friday, I took some time to work on something more fun :D. Enjoy! 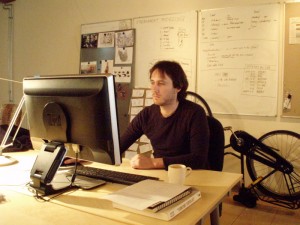 More power in the animation department: Beorn started today as character animator. He was already living in Amsterdam, so it was an easy decision to add him during the final months. Beorn has been doing a course at Animation Mentor (using Blender) and already proved to be a very fast and skilled character animator.

Beorn is born Australian, and since recently with British nationality too. More euro power! 😉

BTW 1: On the picture, Beorn, Campbell’s ever leak bicycle, and whiteboard with secret instructions.

BTW 2: I’ve already seen so much cool stuff here in the studio… but the artists don’t like to share it yet! Just wait a bit, they are making it really awesome!

Freshly arrived from across the Atlantic: Jean-Sebastien Guillemette from Montreal!
He’s going to help us putting the film together: modeling and design, scene layouts, lighting, render, composites. Exciting 🙂

Oh, and I’m back from a 2-week’s holidays in La Palma, Canarian Islands. I’ve spent a week on slowing down and relaxing, and a week on Blender 2.5 code (drag’n’drop). 🙂 One one of my walks there (breathtakingly beautiful green island) I came by Dragon Trees. These are very ancient long living trees that are an important symbol in our film too…