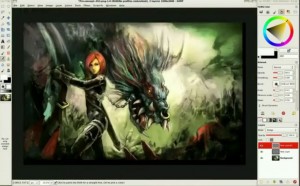 As a preview of what to expect in the Durian DVD box – and most probably also an additional title in our “Open Movie Workshop” tutorial DVD series, our concept artist David Revoy made this incredible cool time-lapse video of a concept art painting. His workflow reveals great tips and tricks, a must see for everyone who’s in awe about watching people with artistic skills, and for every artist who is interested to learn from the masters!

Click on the image to watch the vimeo clip.

This is a time-lapse of a full digital painting illustration with Mypaint / Alchemy and Gimp on Linux.

It was recorded in august 2009 as a technology demo for the 2D open source industry, done with Blender Video sequence editor as well as VLC/Mencoder and (gtk)Recordmydesktop.

A large picture of the result ( not full resolution ):

This entry was posted on Tuesday, August 18th, 2009 at 12:54 pm and is filed under Tutorials, Videos. You can follow any responses to this entry through the RSS 2.0 feed. Both comments and pings are currently closed.