Hoi! (now you know how to wave in Dutch!) 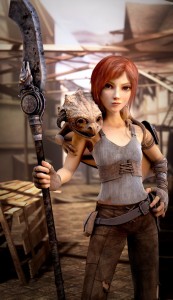 So! exciting times here at the Blender Institute, today is our very-really-thistimeforsure last rendering day, next to some color grade we need to do still, but then is time to grab those big .EXR files and convert them into friendly DPX’s for the guys at Cineco to do magic with it and turn them into 21312 stills of 35mm chemical glory.

That means we’re getting close to our (real!) Premiere, so in order to help us make some noise, 3D World is widely covering Blender topics on October’s issue, Sintel will be on cover + interview time with Ton (Producer), Colin (Director), and William (Animator), and even BBB got a column in “A list of the all the Best CG shorts out there” 🙂

About the cover image:

Sintel and Scale’s were posed by Lee, but I ended up changing Scale’s face expression ( 😀 !) and moved around the arms to fit better the magazine layout.

I had the honor to light the picture used on cover, which I’m sharing with you here, this is a scaled down version of the original in 6k, wich you can find on the DVD (I even tried 12k just for fun and Blender survived! 🙂 ).

Lighting consisted on 4 Area lamps with raytraced shadows + Raytraced Indirect Lighting (1 bounce, Irradiance Cache 8 samples) + AO (multiply), (yeah I’m getting spoiled on this super computers), but still the Render Branch is doing a great job on this, sometimes is actually faster to calculate than Shadow Buffers at the beginning (mostly due to multithreading, this computer is 8 cores HT, so 16 threads).

Render time was only 38 minutes for 6k!, using about 6 Gb RAM on its peak (only Sintel though, the background was rendered separately but only took 8min or so).

At the end, a bit of paint-over was done by David, mostly fixing things like a weird specular on Sintel’s eyelid, fix hair intersections and stuff you only see on still images when you get very close to them 🙂

Thats pretty much it!, hope you like it, I saved this blend file on our SVN so it will be on the DVDs, same as the hi-res version of the characters on PNG with alpha.

Gotta get back to work, sorry for the lack of updates, we’re busy believe me 😀
Hasta luego!
Pablo

This entry was posted on Tuesday, September 7th, 2010 at 12:40 pm and is filed under Goodies, News, Production. You can follow any responses to this entry through the RSS 2.0 feed. Both comments and pings are currently closed.