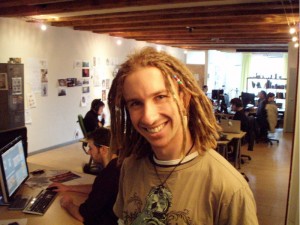 Warning: this is an april 1 post without silly jokes!
Jeremy has arrived already on the 30st of March, forgot to post it yesterday, that’s why. Jeremy will help us the last three months as an animator. He’s from Sydney Australia (too many aussies here!), and worked with Matt Ebb for Promotion Studios on Lighthouse and Kajimba. Great guy, awesome animator!

(BTW: next to arrive next week: Joe Eagar, Blender developer! And then we’re complete… I hope!)

This entry was posted on Thursday, April 1st, 2010 at 2:49 pm and is filed under News. You can follow any responses to this entry through the RSS 2.0 feed. Both comments and pings are currently closed.