Our plan is to do regular development updates, summarizing what we are working on, rather than doing it only for bigger features. Last week and this week the focus is on bug fixing in Blender 2.5. The artists here are already using Blender 2.5 for modeling, shading, lighting, rigging, animation and video editing.  In the Peach project Blender wasn’t used as much in the first weeks, and then we started from a stable version even. So, that immediately resulted in many different bugs and small feature requests from the artists.

We’re not going to list the bug reports here now, instead here’s some photos of our bug lists. There’s also multiple places where you can track svn commits, for example here: , , . 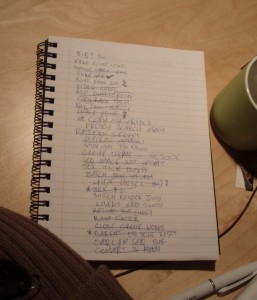 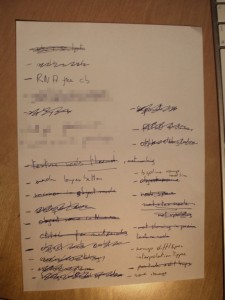 Besides bug reports, I also worked on key configuration. Now keymaps can be saved, and different key configurations can be made, so we can have a revamped 2.5 version, a classic 2.4 version, and some similar to other 3D applications for users switching from or using both.

It’s not really a critical feature for Durian but should give us some more liberty to bring back 2.4x tools without worrying too much about them fitting well in 2.5. This way artists can use 2.4x shortcuts for now, and we can bring back tools in that key configuration without worrying too much if it fits in the new design, while the UI designers work on a revamped 2.5 key configuration.

Campbell mostly worked on bug-fixes and bringing back missing features into 2.5 but also added edge to curves conversion, pattern select tool and an experimental mouse grab option to avoid having the mouse limited by the screen size when transforming and dragging buttons.

This entry was posted on Wednesday, October 14th, 2009 at 10:35 pm and is filed under Development, News. You can follow any responses to this entry through the RSS 2.0 feed. Both comments and pings are currently closed.