Since before the Blender Conference we’ve been working to improve and condense the script– and we’ve ended up restructuring the film somewhat.  So the first minute has changed dramatically!

Here I give you the script and temporary breakdown for the new First Minute of “Sintel.” 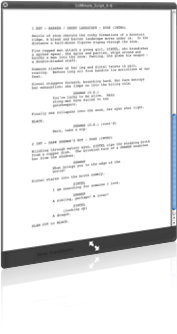 We’re gonna do a few tweaks and polishes today, and then the script will be locked!

Edit: Here’s a PDF version of the breakdown, for those who requested it.

This entry was posted on Friday, November 6th, 2009 at 12:35 pm and is filed under First Minute. You can follow any responses to this entry through the RSS 2.0 feed. Both comments and pings are currently closed.