Thanks for the comments on the Guardians in the previous post, I agree with most of them.

For those who mentioned the time frame and scale of the project – that is the main reason the characters look the way they do. There are plenty of other factors I can point the finger at like:

…but the main issue is still good old fashioned time.

The Guardians were scheduled as all four characters to be worked on at the same time. Modelling, hair, texturing, facial expressions and so on. Other than getting a head start on Jack’s face, the bulk of the modelling was done in a week. Facial shapes (so far) were done for all four in a bit over a day. Granted they use a lot of the same pieces and materials but working on four characters at the same time isn’t particularly efficient. As you can imagine if something was updated, then it often needed to be updated in the other four files for consistency. The four rig files are separate too, so everything needed copying in there as well. I tried merging all four characters into the one blend file for a while but had to split them back out eventually anyway.

The result of the such a time frame is four characters that at least work to a certain level, but to be perfectly honest I wouldn’t include them in a reel or portfolio. Talking with Ton about the current level of the characters, I explained that I can’t think of one quick area that we could schedule to bring them up to a higher level. (We at the Blender Institute also agree that Proog and Emo have more character and polish by the way.) Given more time there is plenty of things I would tweak or simply redo outright, which would be fine for a personal project, but on a really tight schedule that we are having issues sticking to as it is, their budgeted time is already more than over. Originally I should be well into the modelling and texturing work of the snowy mountain range by now.

So – where to from here? Excuses don’t get a film done. 🙂

There has been much support from the Blender Community – financial support, donations of textures, development work and generally cheering us on. As always this is very much appreciated! There has also been talk but nothing really put into practice yet about community contribution to the art assets themselves. This is our first go at changing that:

Apologies for the relatively large file, but if I sampled the textures down too much then there wasn’t a huge point in including them. (Most now 2k instead of 4k.) This file includes all the Guardian meshes and textures with the current rigging progress. Just a basic camera and spotlight with some environment lighting. You should be able to see pretty obviously once you start playing around where the current issues are. I’m not a fan of the hands either for the record.

For the film, we probably won’t use raytracing but it hasn’t been ruled out completely. The lighting in the previous image was kept quite simple because the textures and materials need to hold up before compositing and so on. More of an in-house review image than a promotional image. (One of the corrected ones looked quite dark on my monitor – good Eizo – here so we may have to get them calibrated.) Before I keep rambling –

Feel free to play with basically everything except the face topology as that helps to transfer face shapes and speed maintenance things like that up. Play with textures, additional modelled details, scars, dirt, hair (please!) character traits and whatever you would like to try to make them more fun and unique. Please stick to the style and details of the concept art below where you can, but at this point we are unleashing them a bit to see how far the community can help us bring them visually. 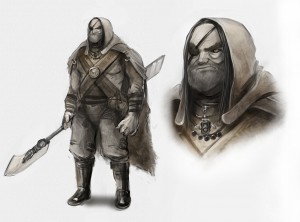 Thanks in advance for your time if you lend a hand- I hope you enjoy playing with them and I look forward to seeing how this turns out. Community involvement is something we probably should have tried to start sooner.

There is an open ftp space on blender.org. It works like this:

When logged in, go to the directory ‘incoming’. What you put there is visible here:

This upload space deletes all old files after a couple of weeks, so don’t use it for permanent storage, link to your file in the comments and we can look into it.

NOTE: Forgot to mention we all use latest SVN builds, so anything above revision 26680 to 90 or so should work fine.

***** NOTE 2: Apologies for the poor communication on our part regarding your help this week, Colin will be posting shortly about how we are planning to organise outside help in the near future. *****

This entry was posted on Sunday, February 7th, 2010 at 9:40 pm and is filed under News. You can follow any responses to this entry through the RSS 2.0 feed. Both comments and pings are currently closed.