A bit of a quick update to keep the community in the loop.

It’s been an experience trying to get things together as quickly as possible. How I would ideally like to do it is treat each character completely individually, have fun with the topology, all the unwraps and textures, spend a lot more time dirtying all the clothing and so on. Basically get really involved on every level and push and tweak things around  because I find all that quite enjoyable.

The schedule here is much tighter than what I have worked with before both in and out of a studio environment, so I am (gradually) getting used to the mindset of  ‘have something that works as soon as possible and progressively refine with the time remaining’. With that in mind, these guardians are getting close to the ‘something that works’ mark in the sense of texturing. There is more to be done – especially the faces with scars, eyes, individuality and so on – but for now I’m moving on to the hair, and fur for the cloaks. Mix of hand painting and photo reference. The skin is all hand painted (though WIP) but I like how that is coming along. Was quite enjoyable seeing as I haven’t hand painted skin textures for a while.

Anyhow, that is where the guardians are at. Much that could be refined or simply added but we’ll see what time permits.

(Edit) A bit of fun here and there is a good thing, so sharing a screencap of eyebrow WIP: 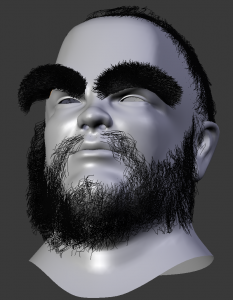 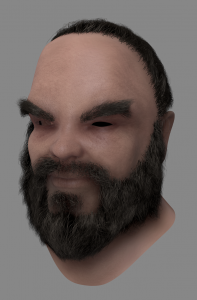 Shows up the work needed in the face texture(s), but quite happy with the hair settings for now. Can probably cheat the hair blending in a bit with texture and the darkening of his hood will help the top hair line as well. Saved most of my test renders (15) so will figure out some sort of thing (slideshow or something) that shows the progression. Was worried about hair a bit because it’s been a while since I’ve done any. Getting there!

This entry was posted on Tuesday, January 19th, 2010 at 8:47 pm and is filed under News. You can follow any responses to this entry through the RSS 2.0 feed. Both comments and pings are currently closed.