Yo! Pablo (venomgfx) here, on my debut as Durian Blogposter (sounds cool uh? 😀 )

The past week was awesome!, not only because it was my first one here :P, but also because David came all the way from Toulouse, to help out, and he was a huge help. 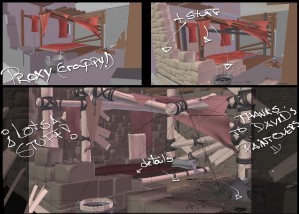 Even though its not finished, blogposting wont hurt (hope so!).

On this scene, my work was supposed to be design-model, then light/compo this shot, but since this was my first week, I’ve been told “No need to be completely productive the first few weeks”, great! relief.. so I took some time to learn the workflow and pipeline here, luckily is really similar to how I use to work before and on my personal projects nowadays.

So, Monday was mostly settling down and playing with the file I found first, which was pure proxies (top-left frame on the screenshot >> ), needed to design! but luckily for me that day David arrived, so I quickly set up basic lighting on a file Soenke worked before (adding the stuff shown at the top-right frame on the screenie), for Tuesday I got a *beautifully* made paint-over my render, even in 2 flavors! sort-of-day, and night. 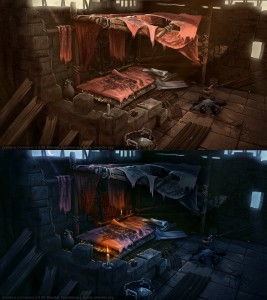 Then Wednesday went about modeling all the small details everywhere, with such a great reference this task was relatively easy, just a matter of time..

Thursday!, until this day I used Approximate Ambient Occlusion’s Indirect Lighting for this scene, which gave me nice results overall, I felt I was in the right path, probably would need a lot more tweakings for faking stuff (bounces, shadows mostly), until I saw some experiments Soenke was doing with Raytraced IL, “wow! gotta try that!” <- along with a O.O’ face, OK render times went up a bit, but the results (and less work on fine tuning/faking stuff) deserved it.

Below is the render with Raytracing IL and Approximate respectively, not really fair comparison though since the Raytraced one has some minor changes to lights , basically because the bouncing was too strong making everything too bright, this also demanded some changes to the materials.. so I spent most of Thursday on tweaking the shading/lighting, some modeling as well but not as much as was needed.

It’s Friday! (..I’m in love! ♪, recalling The Cure, but actually I had a crush on Indirect Lighting 😛 )

Was time for my first weekly! and to show what I’ve been working on the whole week, even when I think I could have done much more this week, I also believe I learned a *lot*, specially on the rendering side, it’s been very productive to me and I’m glad I still have a week more scheduled for this scene, so I can catch up with what I have left to do (more models/cloth!), and also because that scene is not only a bed/wood/medievalish stuff, characters are missing in there!

Lighting setup at the left, how it bounces at the right.

Before wrapping up I want you to see a small screenshot that shows how much magic goes behind Indirect Lighting, on the left is the setup showing I only used 1 Spot lamp for the “Sun”, then a Halo light for the beam light, and the rest is all bouncing (plus a big blue emitting material plane as sky), at the right is sort of how the light bounces to lit the scene 🙂 , a whole new world for me at lighting, love it! 😀

This entry was posted on Sunday, March 14th, 2010 at 11:41 am and is filed under Concept-art, Production. You can follow any responses to this entry through the RSS 2.0 feed. Both comments and pings are currently closed.