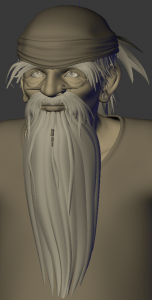 Note: Geometry pieces of hair/beard/brows are temporary and meant to outline shape. They will be replaced with hair particles.

This entry was posted on Monday, December 14th, 2009 at 9:25 pm and is filed under News. You can follow any responses to this entry through the RSS 2.0 feed. Both comments and pings are currently closed.