For the past two weeks I’ve been working on sculpting full time, which I’m quite happy about, it’s been a year since I’ve been able to work focused on actual 3D computer graphics related code for that amount of time, rather than the Blender 2.5 project which is mostly about user interface. The development is being done in a separate sculpt branch, and it’s not stable yet, though test builds have appeared on graphicall.org.

I continued the work done by Nicholas Bishop to speed up sculpting. We started discussing design about two months ago and decided on using a coarse bounding volume hierarchy (BVH), after which Nicholas implemented it. What this does is split up the mesh into nodes, and organize them in a tree structure. Each node has about 10000 faces, this is much coarser than a typical BVH used for raytracing or collision detection. We wanted the structure to have very low memory overhead and be relatively quick to build too.

The BVH is central to various optimization that were done, we use it for:

Memory usage in sculpt mode before and after (2 million poly regular mesh).

Beyond that, sculpt mode memory usage has been reduced in other places as well, approximately halving it in total, with some additional gains in the undo buffer which are a more difficult to quantify. Sculpting performance has improved too, though it is difficult to compare it with 2.4x, as strokes are not spaced the same way. Where the BVH clearly shines is when you work on only a smaller part of a full high resolution model, in that case only nearby vertices need to be taken into account which is much faster. Drawing performance is considerably faster as long as vertex buffers fit in GPU memory (or are supported at all).

The next step that I’m working on is improving multires to better take advantage of this system. That’s turning out to be more tricky than the initial work I did, but it’s starting to get somewhere. Multires has the potential to be more memory friendly than regular meshes, but it requires more work to get it even on the same level, and then some more to get it more memory efficient. Performance is an issue as well, since it requires very high resolution subdivision surface computations, and applying and recomputing displacements. 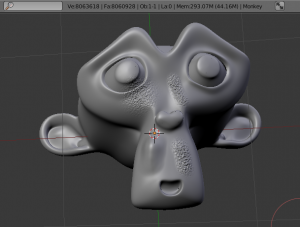 8 million poly multires monkey in sculpt mode, note the memory usage (this code is unfinished and not available in svn yet 🙂

Another issue that we are trying to solve also is integrating this well into the production pipeline. If all meshes with multires data would be loaded into memory when you load a shot file, that wouldn’t fit into memory, and it would be slow too of course. The typical solution used in most productions is to bake the data into a displacement map. Given that Blender has sculpting and rendering integrated into the same package, I think we can make this workflow smoother without extra manual steps by the user.

We’re looking into on-demand loading of multires displacements, either from the .blend file or an external file. This would mean that you only need to have the displacements in memory when you are actually sculpting (in sculpt mode), and not when e.g. animating. It’s tricky though as there isn’t really a good precedent for this in Blender, so we’re looking into different ways to implement it.

This entry was posted on Monday, November 16th, 2009 at 9:09 pm and is filed under News. You can follow any responses to this entry through the RSS 2.0 feed. Both comments and pings are currently closed.