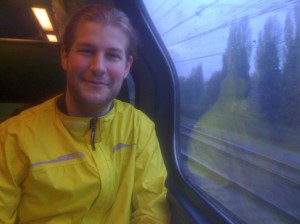 One of the more complex producer’s jobs is to arrange for an international team the legal paperwork to be allowed to stay and work in the Netherlands. According to the authorities, we have five ALIENS in the team who need to get official residency permits. The process is as follows;

– make appointments with IND (immigration services), get 30 page forms for each alien to fill in.
– take aliens to a place where you can get real approved passport pictures (no smiling!).
– take aliens to the Amsterdam city office to subscribe as a resident (needs passport, picture, rental contract of an apartment chamber of commerce stuff, etc)
– take aliens to the IND offices and wait 2.5 hours while IND employees try to fit aliens in a category… but wait, there it is, a miniature exception clause for artists who work temporarily in the Netherlands! 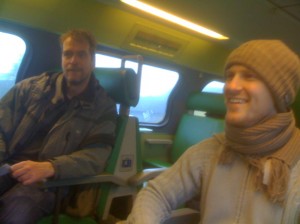 – then being sent back to office to redo the paperwork based on new clause.
– take aliens to the IND offices again, and * hoorah * they get a 6 month temporary residence granted!

And this is the short version of the whole process 🙂 You can imagine the above took about 3 days of time & energy of the team… this week.

Anyway! Another great news is that we’ve found a documentary filmer – Ali Boubred – to hang out in our offices to record action and edit it all. He will soon introduce himself here too.

Oh, and we survived the final step in the process with the Dutch Film Fund today… today I went there with Esther and Colin to defend the latest script changes, production details and some finances. The board will decide within 2 weeks…

Pictures: Nathan, Campbell and me in train. Made by Colin’s iPhone. It were cold rainy days indeed…

This entry was posted on Thursday, November 12th, 2009 at 7:39 pm and is filed under News. You can follow any responses to this entry through the RSS 2.0 feed. Both comments and pings are currently closed.