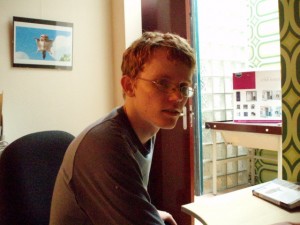 The last of the team members arrived friday, with a day delay on the airport… the poor guy! Joe – everyone knows him for his BMesh project – will assist our team with a lot of crucial development topics, such as cloth sim, snow particles and of course loads of bug fixes. Welcome Joe!

(Sorry for crappy picture, i need a new camera!)

This entry was posted on Sunday, April 11th, 2010 at 3:29 pm and is filed under News. You can follow any responses to this entry through the RSS 2.0 feed. Both comments and pings are currently closed.