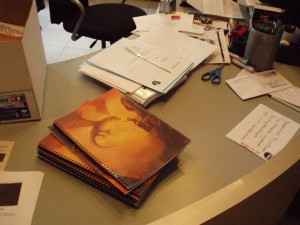 Hey folks… wondering why we are so silent? Today was the deadline for submitting proposals for getting funding by the Dutch Film Fund – who already supported us with a nice amount for the story development phase. It meant a lot of discussions, writing, reviews, turning ideas up and down, making concept art, and that kind of stuff. And not to forget filling in the forms, make a booklet, and – oh dear – translate everything to Dutch! 🙂

On the picture: the desk of the Film Fund, 15 minutes before deadline closure, with 10 copies of the final application, which includes the script, synopsis, logline and title! Just for our fun I’ve blurred the title away for now… we’ll reveal it all on the Blender Conference!

This entry was posted on Wednesday, September 23rd, 2009 at 5:44 pm and is filed under News. You can follow any responses to this entry through the RSS 2.0 feed. Both comments and pings are currently closed.