What is Twitter, a tiny portion of you may ask? Twitter is a service which will allow you to keep you completely up-to-date with the excruciatingly mundane details of Project Durian. 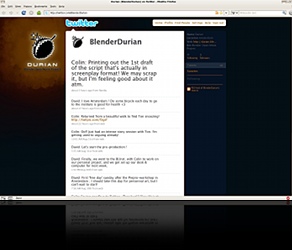 …of course you would!

Just go to http://twitter.com/BlenderDurian/ and click “Follow” to keep yourself updated. You can also subscribe to the RSS feed. Not too much now, since it’s pretty much just David and I at the studio, but as the project heats up you can expect multiple tweets daily!

In the week or so we’ll also try adding some upgrades to the website to better integrate twitter with our blog.

Update: We are also hoping to support identi.ca in the near future, for those who prefer it.

This entry was posted on Tuesday, September 1st, 2009 at 4:53 pm and is filed under News. You can follow any responses to this entry through the RSS 2.0 feed. Both comments and pings are currently closed.