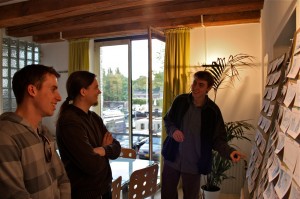 Quick update: last thursday – October 1 – Lee and Soenke arrived in Amsterdam. Today Angela and Nathan dropped in. So I’ve been busy with getting them installed in their apartments and in Amsterdam a bit.

All of last week, Andy Goralczyk and Colin (and David monday) gave a week of Advanced Blender course here. David then went home for a week to his gf. This monday Campbell arrives, tuesday David comes back, and then we’re complete again… and will post regularly here!

On the picture: Lee and Soenke enjoying Colin’s storyboard talk.

This entry was posted on Saturday, October 3rd, 2009 at 7:21 pm and is filed under News. You can follow any responses to this entry through the RSS 2.0 feed. Both comments and pings are currently closed.

20 Responses to “Arriving in Amsterdam”