Archive for the ‘Production’ Category

Since the previous post we just couldn’t stop trying to fix yet another few errors. 🙂 It’s still not totally flawless, some of the textures & material settings were too complex to easily debug or fix.

The 4k files are being copied to USB drives to be shipped to our sponsors. The 16 bits 4k frames are 650 GB in total… not fun for a mirror, nor for uploading either. Need to solve this still, but maybe xiph.org wants to try to host it. Will keep you updated on it. The 4k film will at least show prominently on NAB Las Vegas this year.

END_OF_DOCUMENT_TOKEN_TO_BE_REPLACED

The blog is quiet, but there’s still work on Sintel being done here.

In the past two-and-a-half months we worked on getting the film fully re-rendered in 4k, in a resolution of 4096×1744 pixels. When Pablo left back home to Patagonia mid December, Dolf took over his job for the final-final tweaks and solving some render errors. Yesterday he sent the last tweaks to the farm, and we might have today a working version!

Last week I watched with Dolf the full re-render in 1920 wide downscaled png playback, and the detail in the images is just amazing! It also pointed me to the fact our mp4 files here are quite heavily compressed… we should replace them with 800M versions or so.

In the next days (within a week) we aim at publishing the 1920 (“HD”) wide pngs online, so people can play around with compression setups. Please post links to movie files here (ogg, mp4) if you have good ones, then we update it on our mirrors too!

We will also output an original 4k version in 3×16 bits DPX format. That’s been sent on USB drive to our sponsors first, but I know they won’t mind us sharing it. Still would be awesome to have a couple of public screenings of the 4k version announced. Stay tuned!

I do know that on NAB Las Vegas Sintel (in 4k) will get prominently covered. 🙂

Since mid October we’re keeping our office warm with rendering 4k frames. Pablo and Dolf have been cleaning some errors and preparing all files for this breathtaking resolution. Some of you might have seen the sneak preview of shots at the Blender Conference, at a gigantic 4k screen!

All of the shots have been rendered now, but we suffer the obvious hair problems and occasional crashes still. Hopefully it’ll be done in a few days: this friday Pablo flies back to sunny and warm Patagonia!

Here you can download 5 random nice images from the farm:
http://download.blender.org/durian/4K_examples.zip

Pablo also collected a list of issues with current .blend files (as on the DVDs) and made a log for how-to rerender the film. Will be posted end of the week as well.

An official premiere for the 4k film has to be finalized still… but soon after all material will become available freely, as usual. 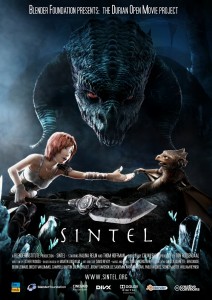 About 250 Sintel posters have been delivered to our office now. They are beautiful quality offset-printed,  in original movie poster size: 27 by 40 inches (approx. 70 x 100 cm). Deserves to get a decent spotlight on your wall!

Posters will be sent in a strong cardboard shipping tube. Due to the non-standard size, shipping costs are relatively high though. This is why we will only charge shipping costs once, also when you order more posters. 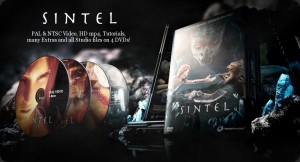 END_OF_DOCUMENT_TOKEN_TO_BE_REPLACED

Our short animation film now has been published online for everyone to watch and spread! It’s been an exciting moment for our team, and for everyone who as eagerly awaited this moment. We hope you enjoy it!

Here is the Youtube link, file mirrors and torrents.

Next on our todo is wrapping up the 4-dvd box release, NTSC/PAL discs with extras and documentary, and 2 DVD-ROMs with tutorials, and all the data to reproduce the fim entirely. 🙂